I have discovered the major draw back to this new BLOG site of mine – unless you are actually online, you can’t make a draft post for later distribution. I have figured out how to write in Pages and then copy to this site when I can access it so that will be the plan going forward. How dependent we have become on instant access/Google/Youtube/Online dictionaries etc. There is a great deal to be said for the old fashioned book/journal/reference!

Srinagar was where we said goodbye to Tsering and our drivers – Namgayal, Tashi and Jigmath. It was very sad to see them go, collectively they were some of the best drivers I have ever had, always friendly, helpful and sweet in lovely open sort of way. Not to mention the complete confidence they engendered going over some of the hairiest roads  and mountain passes I have ever had the pleasure of experiencing!

Tsering, of course was unique and special and I very much fear has set the bar impossibly high for our future guides.

Unfortunately we also had our first evidence of some of the religious and ethnic tensions  between these two states. There had been a concert in Srinagar the night before – Zubin Mehta’s “Concert for Peace”, and some rioting took place – there are still strong seperatist sentiments in the province regardless of how practical the idea is…. Our drivers were very apprehensive of driving into the area – they have Ladakh plates on their cars and of course are Buddhists going into a predominantely Muslim area. It looked like we were going to have to hire local cars to take us the last 100 km. or so, but eventually with assurances from TN and Mercury that they would cover any damages – the drivers don’t own the cars – they agreed to take us all the way. It was understandably tense tho’ and at one point we were stopped in traffic because of a huge flock of sheep and one fellow started banging on the tires of our car – perhaps it might have escalated but I foolishly (?) stuck my head out the window,  snapped his picture and then showed it to him – afterwards I thought “how stupid” but it worked so perhaps not. In any case I know none of us really relaxed until we eventually got an email from Tsering assuring us that they had made it home safely! 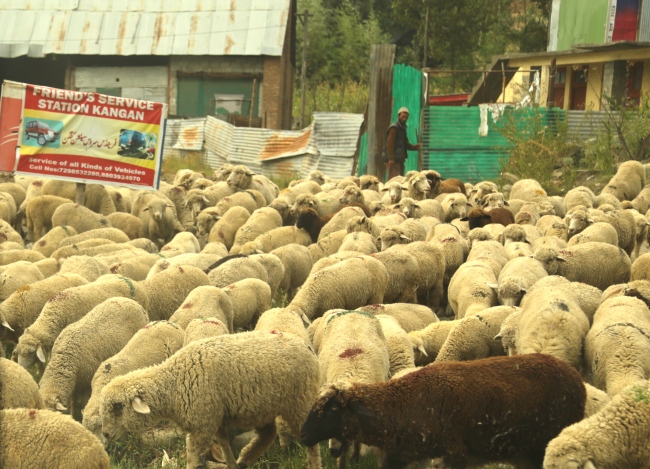 Srinagar was such a complete change of pace from Ladakh. I can’t say I could tell you anything about the city really, except it is big, full of people and chaotic. Ah, but the lake! It actually has several parts to it and is remarkable shallow; I think the deepest part is no more than 10 metres.  We were met at the dock by Shikaras – shallow draft, paddled boats with lovely canopies and lounging beds in bright Kashmiri fabrics. I felt rather like a nabob! 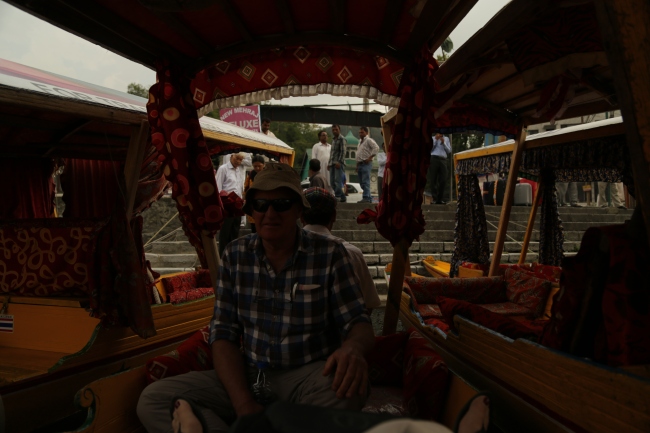 Off we headed across the lake to the area where the most gorgeous houseboat awaited us. They don’t actually travel around, being tightly moored in place but they do give a slight sense of movement. The hulls are made of cedar and apparently as long as they stay in the water they are virtually indestructible. The upper deck is ornamented with incredible woodwork; carved and fretted and pierced and generally opulent to the nth degree! 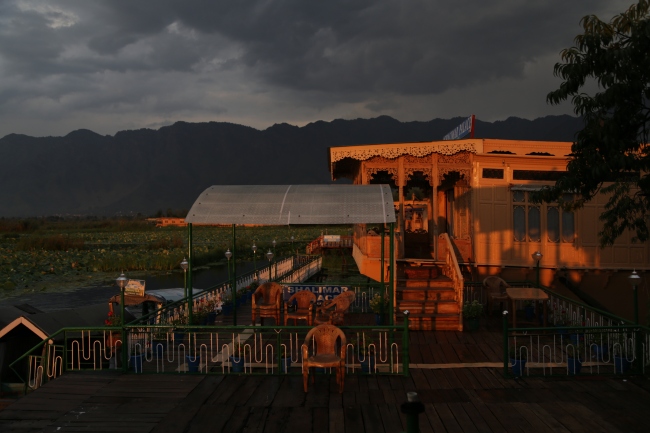 There is a covered porch, ideally suited for whiling away the hours; a main salon, where we did a very great deal of shopping; a dining room and then a long hallway with enormous bedrooms leading off it. Everything done up in these lovely ornate woods. Personally I think we had by far the best houseboats on the lake, sadly a lot of them have seen much better days…