Another village which Gudrun and I visited, while similarly “out of time” as the river gypsies, was much more permanent and even affluent – within the parameters of local wealth. As we arrived the village was preparing for a big occasion – the initiation of several boys as novice monks. Most people were dressed in their finest and quite a number of the children were done up in these brightly coloured, highly festive costumes – perhaps traditional “hero” attire?

After wandering most of the morning and poking our noses into everything – I am constantly impressed at the courtesy and patience of these people – we returned via canoe to the hotel. That afternoon we all returned to this same village for the ceremony – after a while our group of men got bored I think and left but most of the women stayed – and we all got the “money shots”! After lots of feasting, music, singing, chanting and story telling by a “professional” the families got down to the business of initiating their sons. Most of the boys will spend a short period of time in the monastery and return home, girls are there for life apparently. The actual head shaving which is done by the resident monks, was solemn and very moving to my western eyes – with a big dash of practicality thrown in! Most of the children seemed pleased with the process, a few were very, very focused and one poor lad was miserably unhappy about the whole thing. 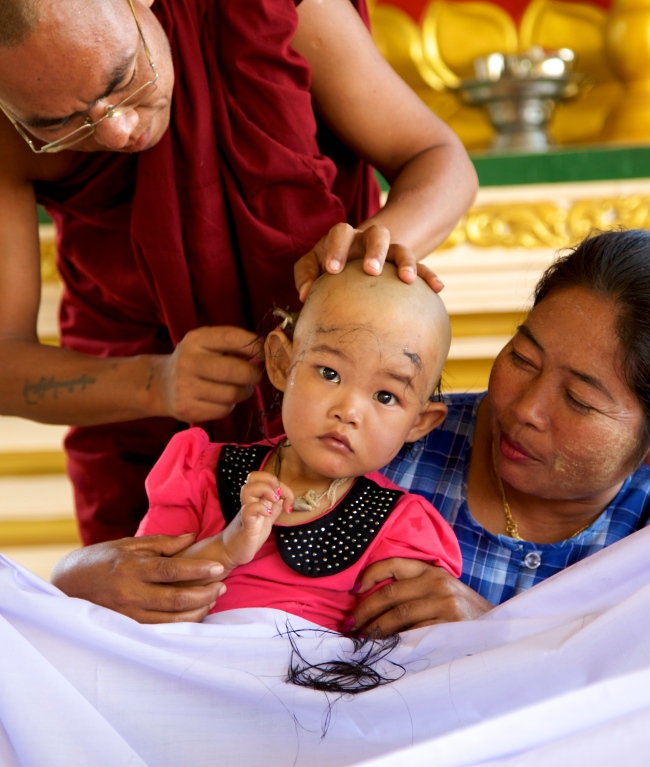 On a much lighter note – as we returned home, tired and happy we crossed a small bridge and watched local women peel and clean garlic – huge baskets of the stuff – in the river. I did think twice about eating it thereafter but ultimately decided that it hadn’t bothered my tummy up to that point so why worry just because I now know how it is “cleaned’!