The morning fog had a grey, viscous quality to it. Perfectly in keeping with our physical states. Gudrun and I were suffering from “mild” hangovers from my birthday party the night before. We had gone with Micky, Sheeba, Amrita and Uday to a renowned Delhi restaurant called “Indian Accent”. A very posh spot with a fusion of Indian flavours and spices with European presentations and sensibilities. We had booked the chef’s table in the kitchen but through some booking snafu ended up “only” with the chef’s tasting menu. While I was disappointed – I had REALLY been looking forward to the experience of eating in the kitchen and watching everyone work (possibly pick up some good tips?), the meal was amazing. We had at least 15 courses; Gudrun and I had different wines with each course – hence the hangovers! 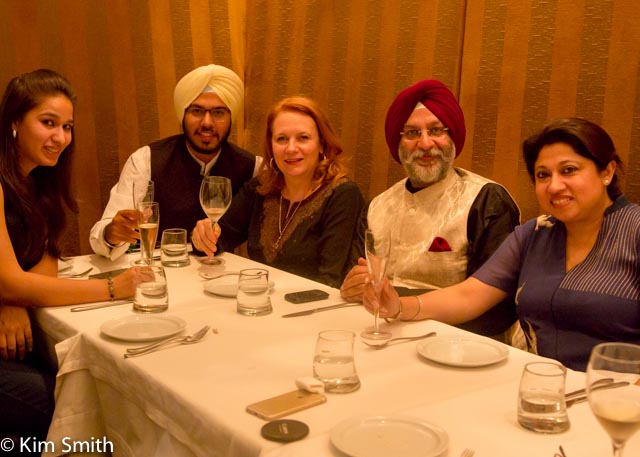 You can just see the top of my salwar kameez – a birthday present from Sheeba and Micky!

We were fortified on the four hour train ride by a long breakfast; tea and biscuits, cornflakes with hot milk, vegetarian patties, dessert thingies and more tea. The country side gradually became more lush, more rural and the air clearer and sweeter smelling. I had warned Gudrun about Haridwar’s cacophony and dirt but I think my “eye” has become more accustomed to India. It was chaotic to be sure but not as overwhelming as my first visit. The ashram too was infinitely more welcoming and familiar. No culture shock this time!

I have “Joy” as my room (much better than last years “Obedience”) and Gudrun has “Modesty”. I got the better name in my opinion but she has a working shower so it all evens out really.

Life has settled into the serene routine I have come to expect and have actually been craving. The morning meditations are punctuated by the sounds of different birds each day – its as if they decide to take turns. Yesterday was the kreeling of a pair of hunting hawks or kites, the crows grumble and squawk, the parrots chatter and scold, and sometimes we hear beautiful songbirds trilling unseen from the tree tops.

We have been cautioned from walking down to the Ganga just yet as there have been sightings of a leopard. I suspect it is probably a youngster from across the river, which is a large national park, looking to establish a new territory. I hope she or he returns there before there is a clash between the wild and the domestic!

Time for lunch and perhaps a last bit of tranquillity – we have 100 new people arriving tomorrow!