Whether it was the whisky or just time for the jet lag to wear off, I finally managed to get a full nights sleep. The farm is tranquil if not quiet, the airport is nearby and the traffic starts “yodelling” very early. Plus Moti, who looks after the place, brings me tea and biscuits at Sheeba’s instructions as to the time I should be getting up in the morning or from my nap. There is no gainsaying him either – when it is time to get up – it is time – not 10 minutes later!

Some impressions – the women I’ve met are like birds of paradise; friendly, laughing, colourful and quite assertive. Some are very accomplished business or professional women and some are stay at home wives. Everyone however, seems to have many, many servants – cooks, drivers, nannies, gardeners, maids etc. I don’t doubt the people who emigrate to Canada have a hard time of it at first because life in India at a certain economic level is very, very nice!
The men are a bit more of a cypher, which isn’t too surprising as I think in some ways there is a certain divide between the lives of the men and women. Besides I think they don’t want to run a foul of their wives chatting up – however innocently – that “Canadian woman”! They remind me a bit of some of the Italian men I know; impeccably dressed with perfect manners and all quite handsome with their rather fierce beards and turbans. The Italians call it “la bella figura” – presenting a beautiful appearance to the world. Everyone I met in Amritsar has mastered that art!
Social occasions are interesting and I preface these thoughts with the caveat that the wedding activities may have influenced things quite a bit. On the one hand, social visits seem quite formal; everyone sits around in a “salon” with furniture arranged all around the perimeter, drinks are served by the host, food is served by staff and conversations ensue. On the other hand; people wander in and join in conversations or just pick up and leave, sometimes in the midst of things. Other people might be in the room but completely absorbed in other activities and of course children frequently occupy centre stage. 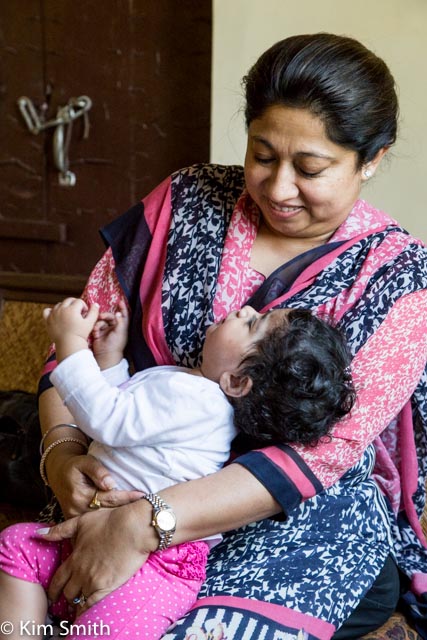 One last thing – because I’m always behind the camera – there are seldom any pictures of me! This is almost the only one – I’m in the garden with Sheeba and her mother after the wedding ceremony.