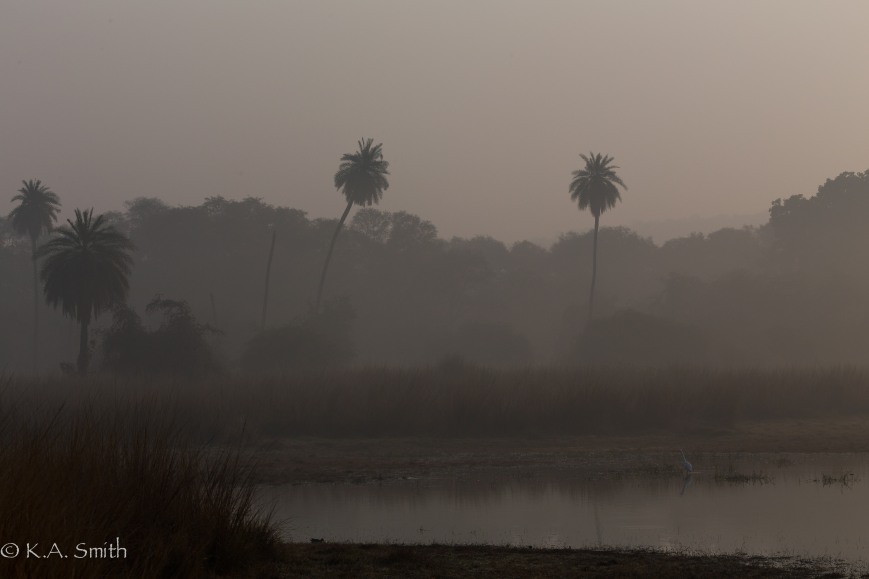 An unknown young male tiger in the early morning mists

Ranthambhore Park life starts early. Wake-up call at 05:30 – I stumble around in my tent waiting for the energy efficient lights to warm up sufficiently to see what I’m doing. My camera bag is all prepped – me not so much, but with a very limited wardrobe the choices come down to the least dusty really. I pad down the path to the main building and listen to the call to prayer. The muezzin here is lovely; he sings a gentle, lyric invitation which floats out on the cool morning air.  So unlike the often strident, canned cacophony from blown speakers we hear in the cities.

Ramsingh awaits with his gentle smile, masala chai as I like it in hand and biscuits. I always eat a couple and tuck a couple more in my pocket for refuelling halfway through the morning. The other guests and I quietly talk about our experiences, expectations and for those of us with our cameras lined up against the wall like like tall blond soldiers – we trade lens specs and bragging rights.

Salim, who has become my friend and is always my guide arrives with driver and gypsy, and all of a sudden its time to rush, rush, rush! Blankets, beanbags, cameras and bags are loaded up and off we go. The cool morning air is very damp and sometimes the fog gets pretty heavy. As it is usually just Salim and me in the gypsy we will pick up two or three of the park guards who are starting their shifts. Everyone is anonymously bundled up so I can only distinguish the different men by their voices. The chatter and laughter counterpoint the morning stillness – they maybe discussing weighty matters or simply gossiping about the tourists – I don’t know and likely never will but I love listening to them. These are men who are passionate what they do.

As we drive into the park towards the starting point of the different zones I see these large black blobs at the highest points of the winter bare Salar trees which gradually resolve into peacocks, and languor monkeys. It always astonishes me that the peacocks with their massive tails can actually fly, never mind manage to get up that high. 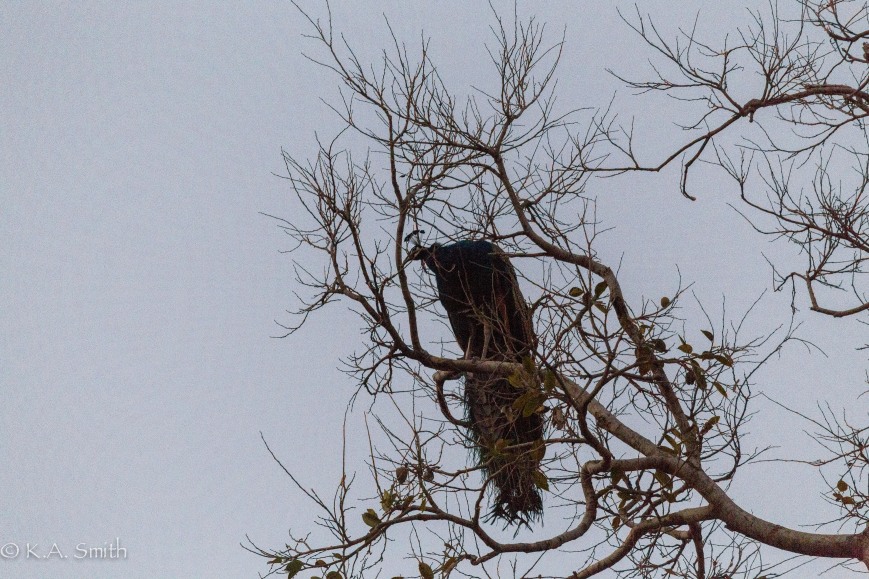 Peacocks at the tops of trees in the early morning

Unless Salim has a specific place he wants to check out, we will often stop, shut off the vehicle and just absorb the start of the morning. The stillness is absolute, there aren’t even any aircraft fly zones. As the light brightens, the first tentative bird calls are heard, soon the forest sounds like an orchestra warming up. The orchestra eventually settles into a sunrise symphony – the birds play the woodwinds and strings; the sambar and chittal the timpani section, the peacocks and langurs are the brass. The babblers (yes that is their proper name) infest the acacia trees and catch up on the nights activities, the treepies bounce around with their melodious calls and the crows cackle from on high. Then the deer start. Its’ mating season so the bucks sound out with a particularly off key honking, the does bray to their fawns to stay close. For such delicate looking animals the chittal are remarkably loud. 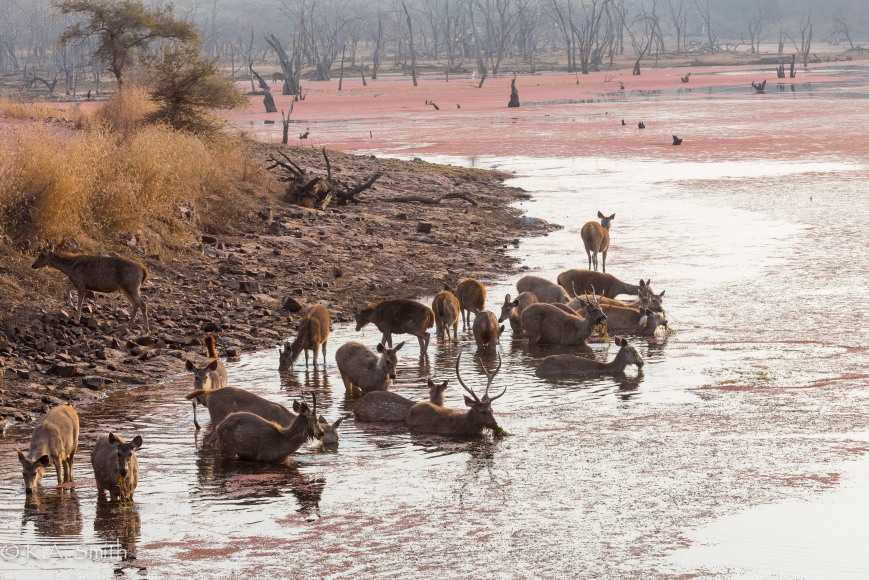 Sambar deer by a drying out lake

Perhaps if we are lucky we hear the barking alarm calls which mean a tiger is on the move! Then we move – jouncing at speed over the trails to find the right spot to catch a glimpse of the kings and queens of the forest. Salim’s genius comes into play here as he has an uncanny sense of where the tigers are likely to be and seemingly effortlessly positions my gypsy for the best photo ops. It certainly doesn’t hurt that he is an amazing photographer in his own right – I have learned so very much from him. The other guides defer to his knowledge and experience, and most drives are punctuated by lengthy conferences on what, when, where and who heard or saw something! I think its kind of like playing blindfolded chess! 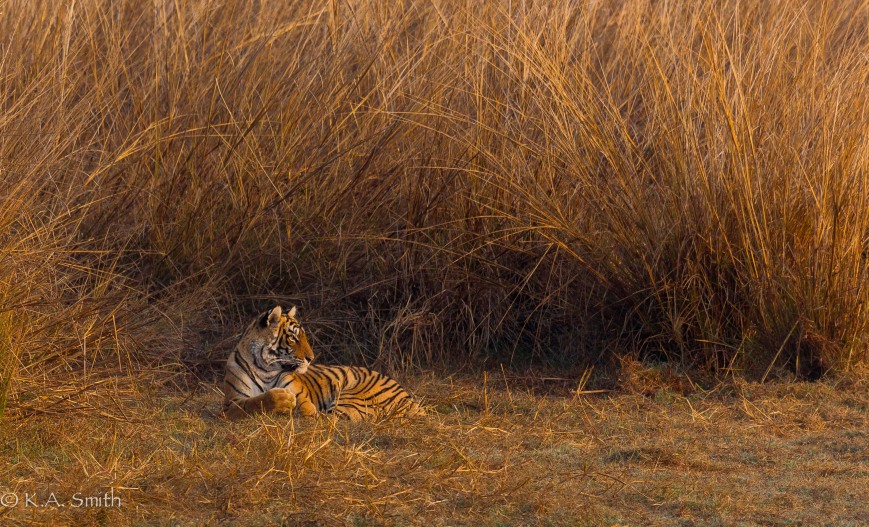 Arrowhead at her leisure in the tall grasses

Just in case you forget they are apex predators! 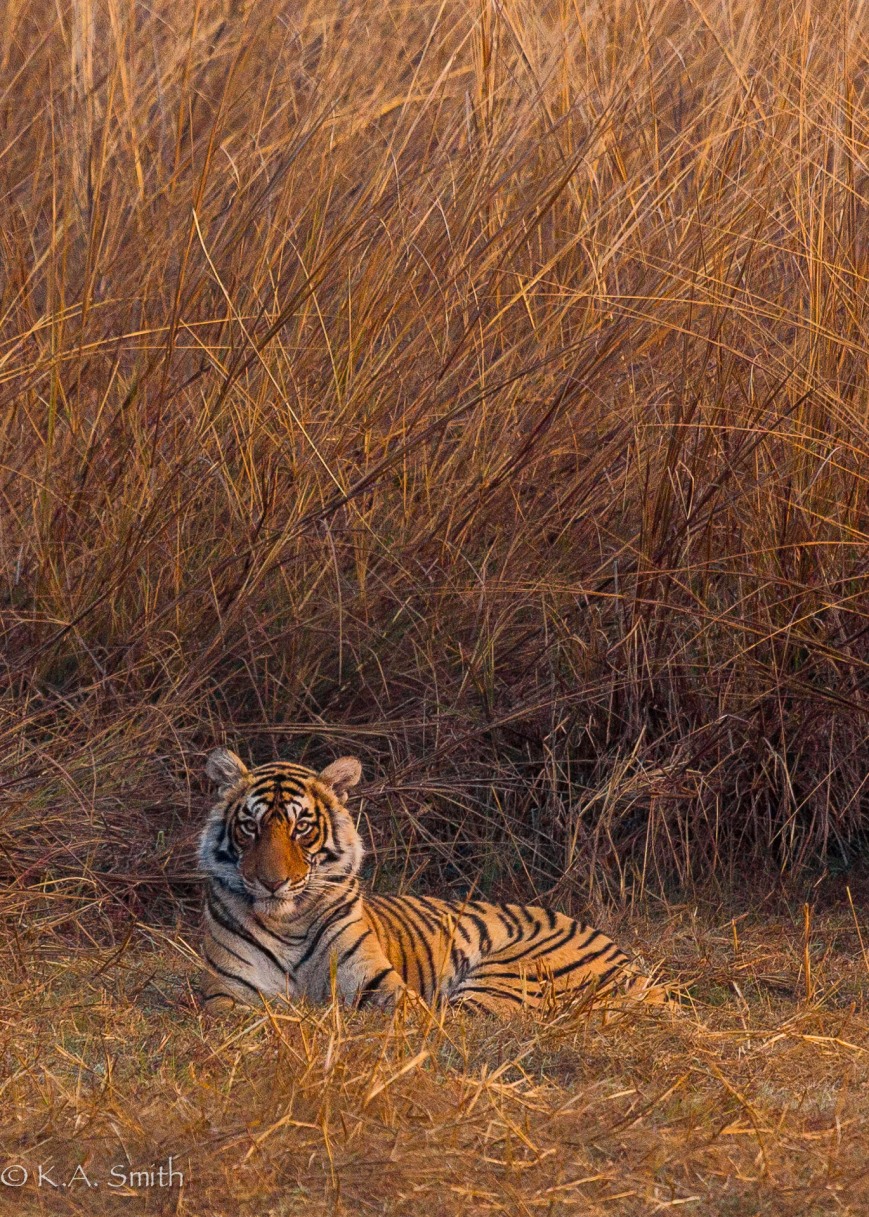 Afternoons have a different flavour; its hotter, dustier and the wildlife starts to congregate near the lakes or waterholes. The water is of course both necessary and hazardous. While foraging is better, it is also prime hunting ground for the tigers – and the crocodiles – some of whom are 2 or 3 metres in length – those gaping pink mouths are more viscerally terrifying than the cats ever will be as far as I’m concerned. 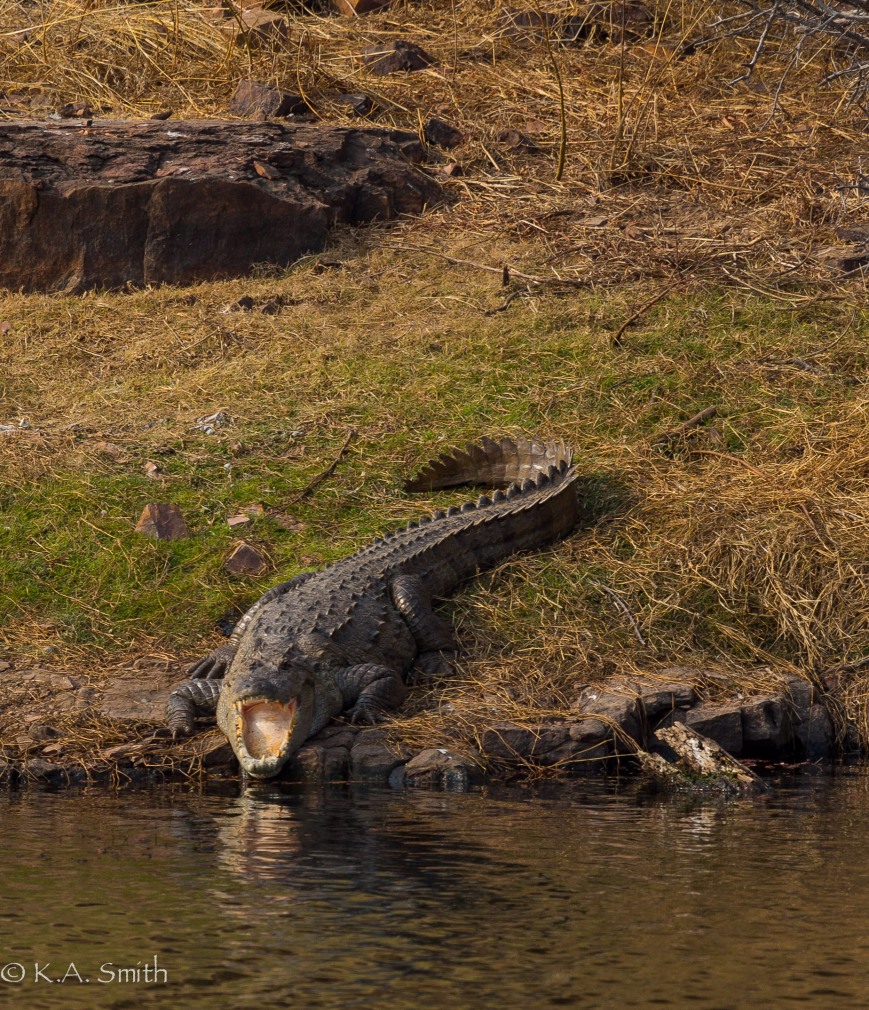 Anywhere we stop for a while inevitably attracts treepies. They are handsome birds with black and orange markings, a long flippy tail, a complete curiosity about and absence of fear for humans. Those forgotten morning biscuits which have been reduced to crumbs in my pocket become tasty treats for the birds who will sit on your head, hand or shoulder to have a snack. Salim says I really shouldn’t but they are so much fun to feed! 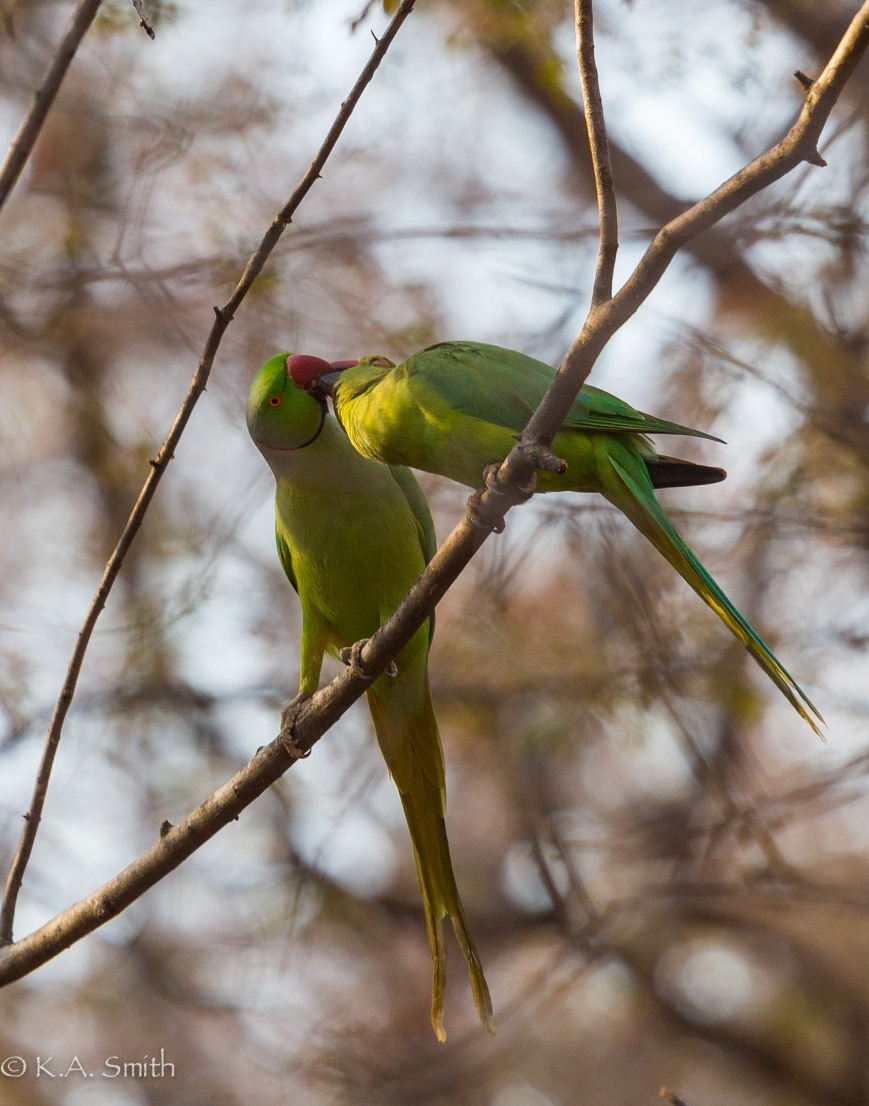 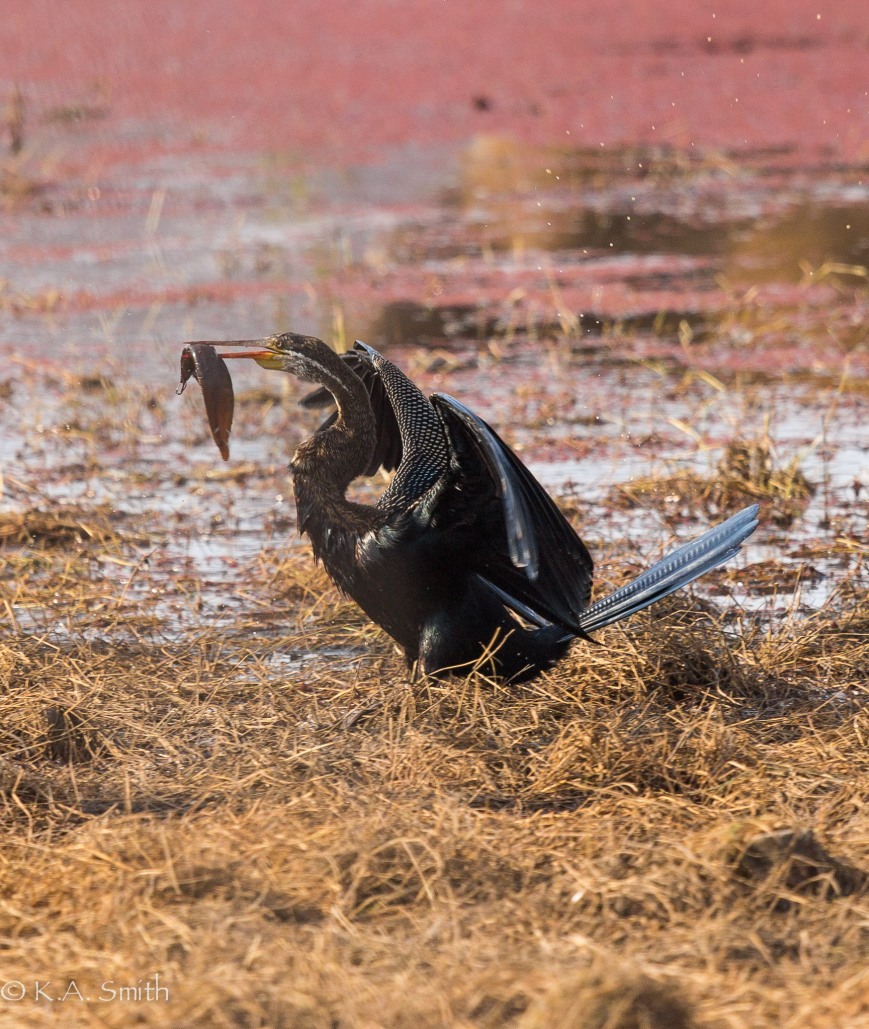 The sun sets pretty quickly this close to the equator and it gets cold very fast. We pick up another complement of guards to take home and head back to camp, filthy dirty, chimping our best photos or commiserating on missed chances. Ramsingh is there with more masala chai or a cool fresh lime soda and then its back to my tent for a much anticipated shower. The hot water is a tad temperamental so there are frequent shrieks of outrage and shock. Dinner is served under the stars and most evenings end early. It is a dry camp but no-one fusses if you happen to have a very nice single malt whisky in your bag – purely for medicinal purposes of course, to cut the dust at the end of a long and always wonderfully satisfying day. 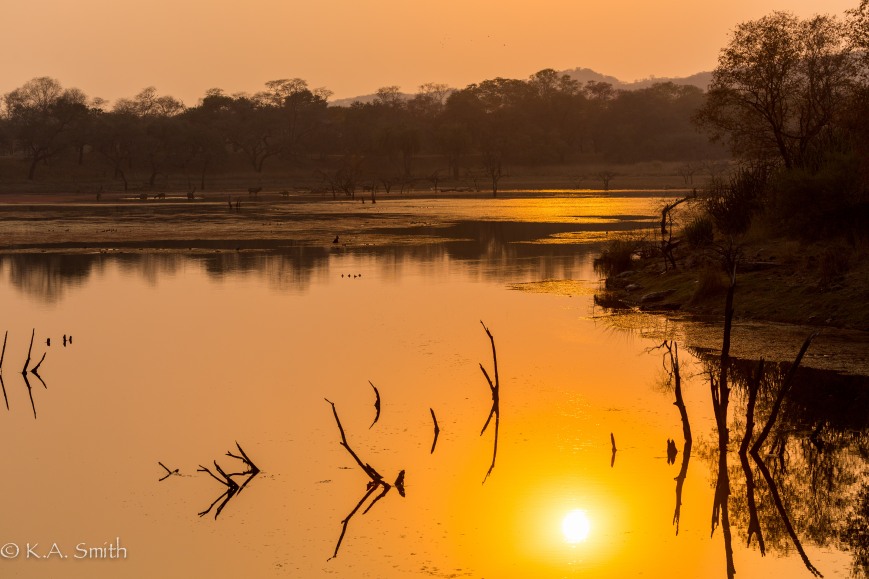 Sunset after a long day