As our flight descended into Tehran all the women on the flight started digging around in their handbags, pulling out scarves, hair clips, buns and pins and covering up. A few women donned the full scale black hijab, burka or chador going from individuals to anonymous cyphers. Its going to take some getting used to….

We were met by the owner of the Iranian travel agency – a delightful young woman named Maryam along her husband and partner Amir. The drive into the city was completely surreal – we’d arrived on the day of the Martyrdom of Husain Ali, which is one of the major events in the Shia calendar and a day off for everyone. The boulevards were completely empty of Tehran’s famous traffic jams and no one was walking on the streets.

All that changed by evening as we walked into an older part of the city with throngs of people, musical laments serenading us from huge speakers, stalls distributing sweetmeats, sherbet and dates, street vendors selling packets of small candles and knots of families lighting those candles on any horizontal surface to be found. It was very friendly and hospitable, I was offered plenty of candles and firmly taken in hand by one matriarch who emphatically demanded I light a few candles and rewarded me with a huge smile and pat on the cheek. That she was at least 10 years younger than me was not lost on either of us! Unfortunately no one would allow photographs and with the religious nature of the gatherings I was reluctant to be sneaky and catch them on the fly.
Four of us flew down to Bandar Abbas, the southern most city in Iran and a huge shipping port on the Straits of Hormuz with Amir as our guide. We were immediately bombarded by the heat and humidity, and by the unrelenting blue sky – almost aggressive in its brassiness.

The Islands of Hormuz and Qeshm are lunar landscapes completely devoid of anything resembling greenery and possessed of the most astonishing geology. I’d love to revisit them in the company of a geologist – there are striations of minerals which are so vivid that one rather unimaginatively named valley – “The Rainbow Valley” is a Unesco World Heritage site. There are lead, copper, iron and a myriad other metal/mineral deposits, layers of salts and small mountains of single mineral deposits. They mine a type of ochre which has been used as a cosmetic, paint and dye base for millennia.
The basic rock is a soft sandstone with a considerably harder cap which allows for some spectacular rock formations due to wind and in years past, water activity. We spent several days scrambling around in 35 c. + heat looking at rocks – a completely different approach to Iran than the usual I think. 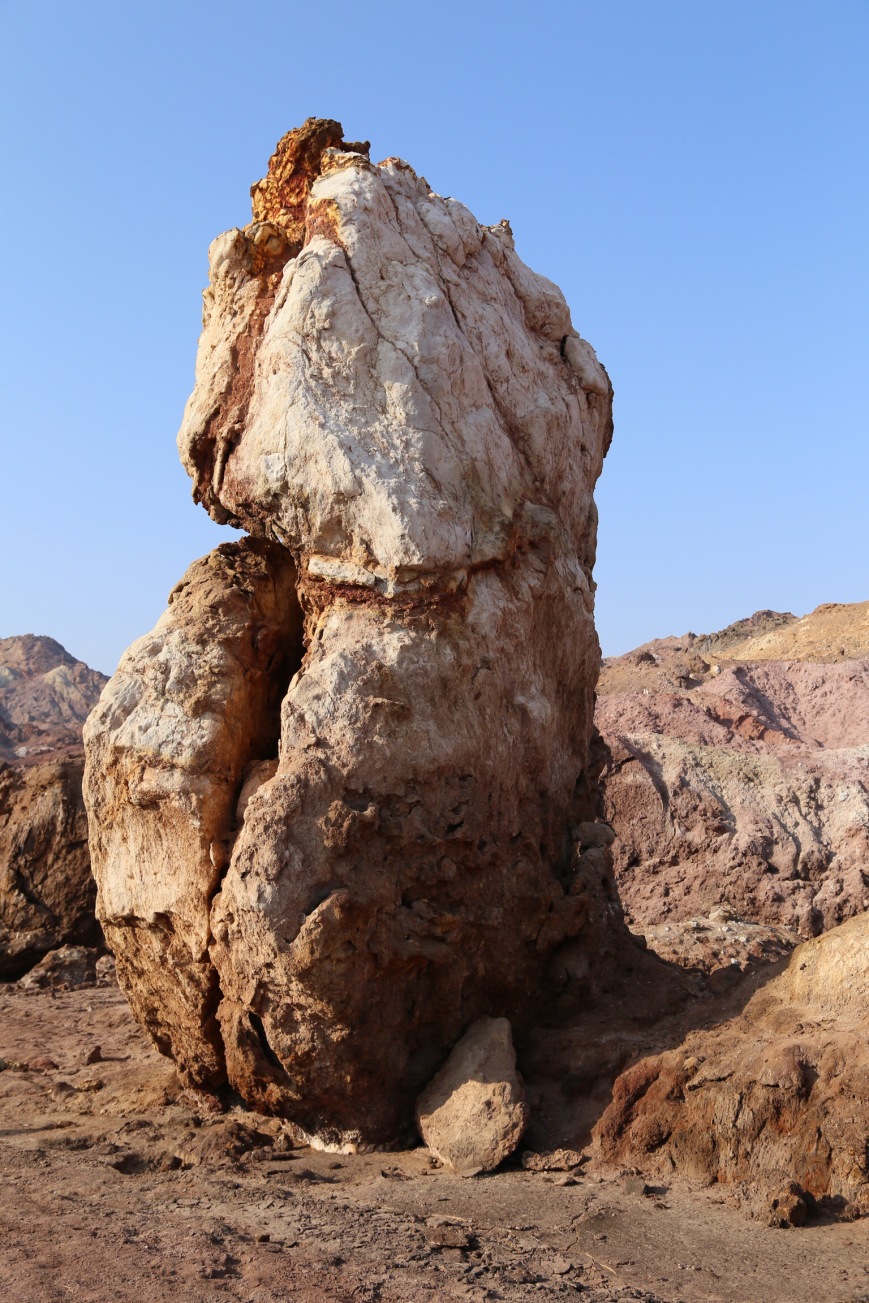 The people we met were friendly but quite shy – I don’t think the area is any kind of tourist destination. Both Hormuz and Qeshm were likely smuggling and/or pirate havens in years past but changing political environments have made Hormuz a virtual ghost town – population 7000 and declining, and Qeshm a thriving free trade zone. The difference is palpable.
The south is also very conservative, virtually all the women we saw were covered head to foot in chadors – some brightly coloured and patterned but most in unrelieved black. Our guide has two wives and seven children – I think he might be in his early forties! This is the toughest perspective for us to wrap our heads around. There is a certain lip service to a kind of equality but the reality is another story.

We were taken to a number of gorgeous beaches – sunny skies, azure waters, balmy weather and invited to admire but not touch. We kicked off our shoes, pulled up our trousers a bit and got our feet wet – a sort of delicate torment. We eventually ended up travelling by pirogue to these very isolated coves; MC and I banished the very shocked and titillated men to the rocks at the far end, peeled out of our scarves, tops and trousers and went for a swim in our underwear. Water like silk sliding over our skin, salty enough to float easily and schools of tiny fish swimming in formations around us. You see “but of course you can swim – only the men”! Sheesh!

Riding the ferry back to the mainland I was really struck by the women. None of them would allow me to take their photos (the men are always a different story but not what I was interested in then). Swathed in fabric they are constantly fussing, fidgeting, fiddling and fixing their coverings. They remind me not so much of crows – although that could be an apt description, as a colony of bats. Huge dark eyes and a ceaseless rustling susurration of movement. For me, the real tragedy is seeing the young girls turned from active, wriggly, physical people to anonymous, static beings focused on covering up their identities. I am assured that in the cities it is very different and that life is changing ……?