I’m sitting on the wide, sheltered veranda here at Lakeside watching the rain – the much, much needed rain. In the normal course of events the veranda would be providing shade and a cooling breeze to while away a lazy afternoon. Now the downpour and cool (!) breeze are pulling me back to the greater shelter of the central walkway. I can see three or four crows bouncing around the lawn – they seem to be having a grand old time – diving through some of the low bushes to loosen more of the water drops, preening and fluffing their feathers in a kind of crow car wash. The peacocks just look bedraggled, miserable and the cocks are strangely bereft without their elegant tails – they are just starting this years’ fanning feathers. I’ve been sitting so still that a chipmunk almost ran over my foot and to my great delight there is a small kestrel or raptor perched on the railing near me – she doesn’t appear to like the rain either – haughty and grumpy at the same time. Naturally, I am delighted with the rain! I hope it is spreading further into the plains around Tirumangalam and Dindigul where it is also desperately needed.

The lake itself  has shrunk incredibly in the 18 months since I was last here. The small water gate where the water buffalo would slosh by in the shallows is now at least 100/150 metres from the water and new grazing ground for sheep and goats. I don’t know if the shrinkage is just the result of the ongoing drought or if it is being sucked dry for the agriculture in the surrounding area. Probably the latter – there are huge coconut plantations nearby. How do you balance the needs of the farmers and agriculture versus the wildlife, the fishers and the beauty of the lucent waters which nourishe the soul? And yes I realize that when your crops are withering from the drought, the beauty of the lake is entirely irrelevant. Tangible evidence of the forces of climate change with the poor or absent monsoons this part of the country has faced these past number of years.

On a much brighter note, I had a marvellous, albeit exhausting time with the Pongal celebrations. BTS (the Indian Charity) really goes all out – all the kids from all the outlying residences were bused in on Friday afternoon and settled into the local spots – full to bursting with excited boys and girls! Friday night was relatively low-key with the quiz competitions and set up of the next days’ events – which isn’t to say that somewhere in the neighbourhood of 500 kids from four to sixteen is in any way quiet! Our guest house was full to bursting too, with visitors from the charity’s headquarters in the UK, other sponsors and the principals from the Indian board. Muthupandi, who is the major-domo, chief cook and bottle washer for the guest house was kept incredibly busy looking after us all and preparing vast quantities of delicious food.  Saturday morning we were out on the sports field by eight a.m. for the opening ceremonies, parade, flag raising, “visitation” of costumed historical figures and of course track and field events

I had been taken in hand by the indomitable Nagalakshmi earlier in the week and under her stern guidance purchased two sarees in Madurai. So there I was draped and thoroughly pinned, galloping around, camera in hand for the better part of the very hot, dusty and sweaty morning – nothing I could say to her about the need to be able to move easily, clamber around or just not be concerned about my attire while working made the slightest difference. I was an honoured guest, would be properly turned out and that was that. At least she did concede that I was going to need a LOT of safety pins! Turns out they looked pretty good if I do say so…

A short break for lunch and we were back at it at the main stage until almost 10 p.m. Me in the other sari – but same arguments – same results! I was sunburnt in odd patterns, incredibly hot and my right arm felt like it was going to fall off by the end – that camera of mine is damned heavy. Towards the end of the evening I started thinking, “Ok – done enough here, nobody is going to object if you quit now” and then another troupe from another residence would get up on stage to present their skit or dance or whatever and I’d think, “Well I can’t leave them out” and so on I’d go. I might have whined a bit but really it was a blast and I did get kick out of swishing around in my sarees. 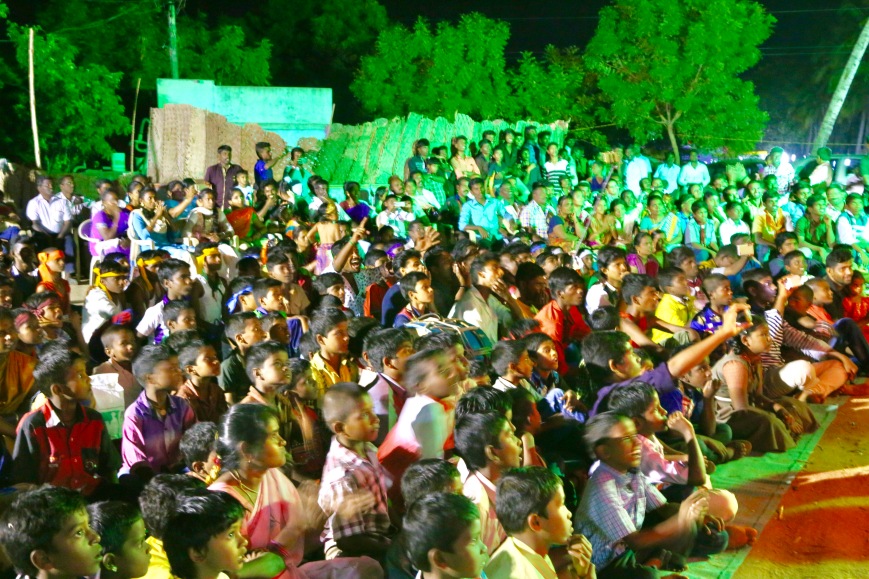 Then there was the Finance Minister, a former student of Dr. Raja (head of BTS India) who drove in from Chennai (really?) along with an enormous entourage to make a speech and kick the tires of the new school; the press reporters and photographers, and of course parents, other related children, former students and friends, dogs and the all important Pongal cow (who we never actually saw other than a certain fragrant bit of evidence that it had been there). 1200 photos later…. 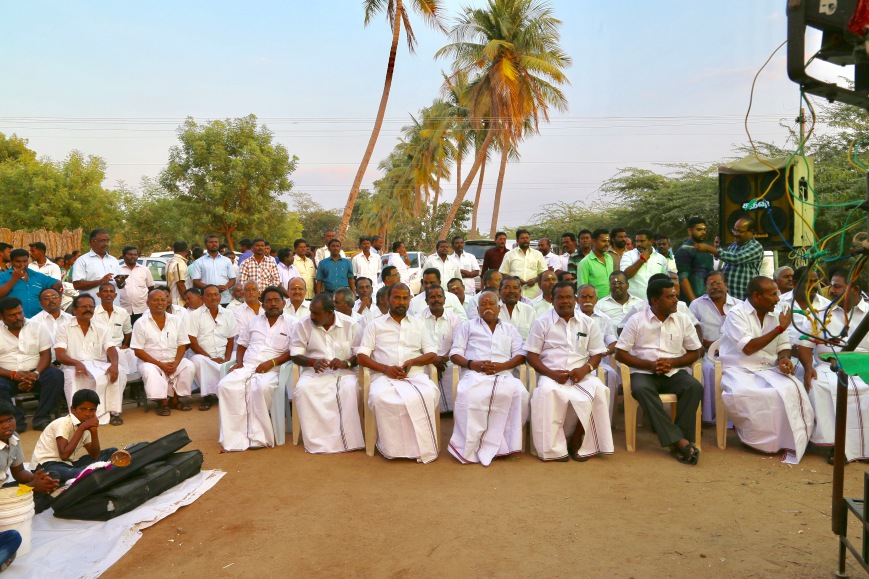 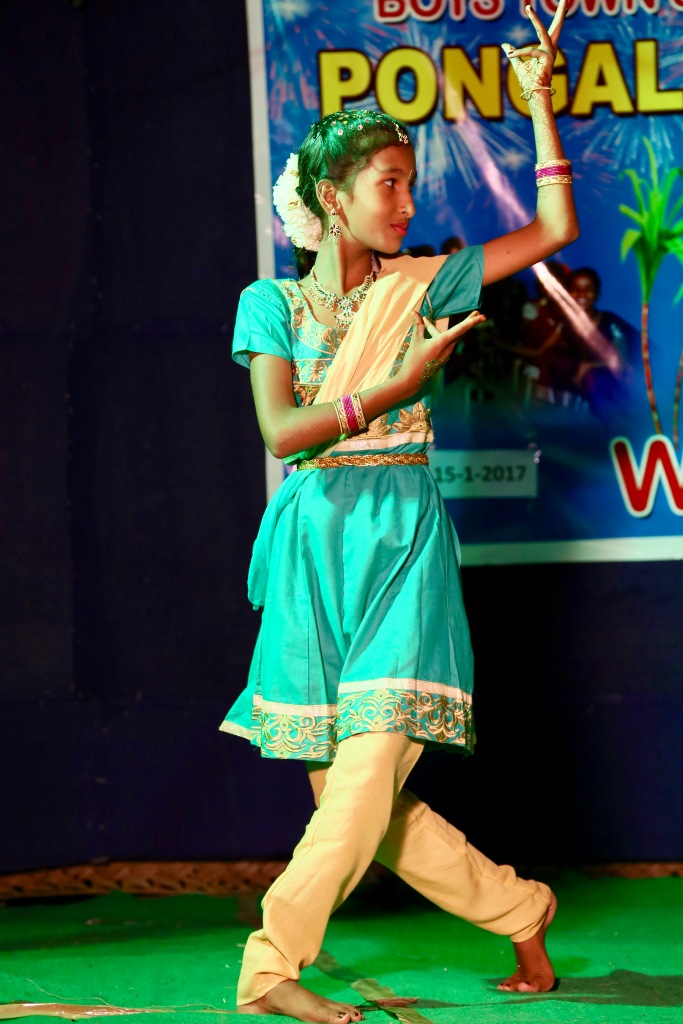 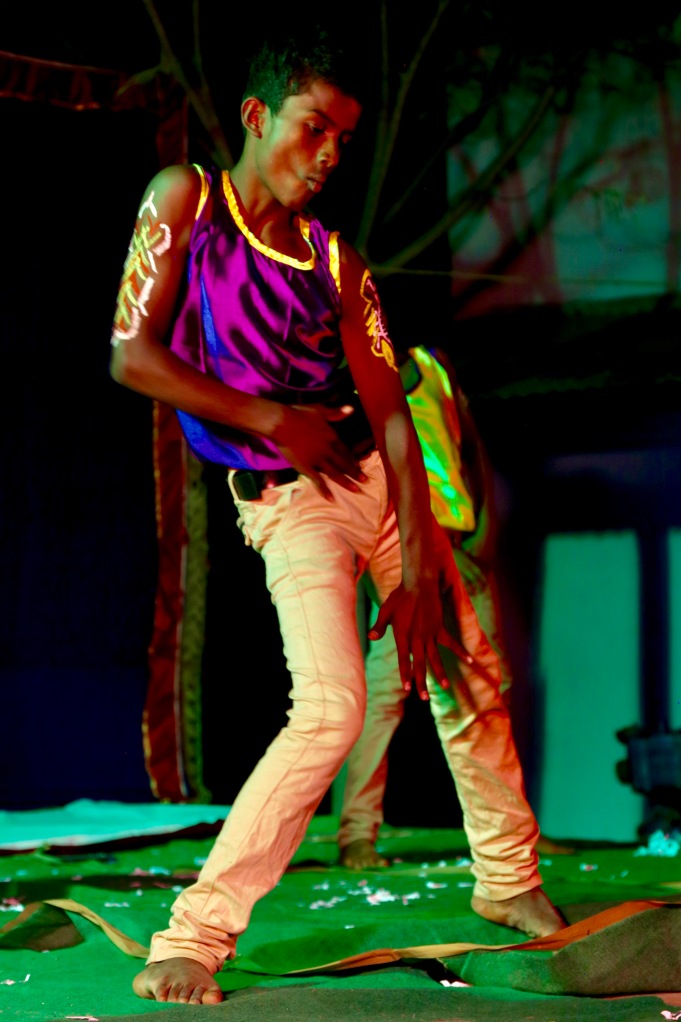 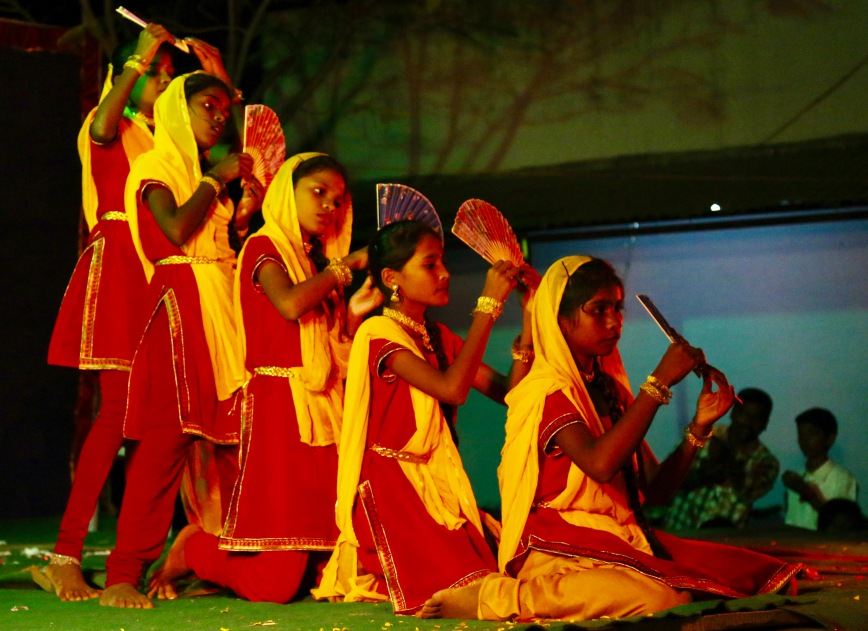 8 thoughts on “RAIN and PONGAL!”