OK, Wadi Mousa and Petra! A wonder which has been on my “places I must visit” for a very long time. And it certainly didn’t disappoint although not entirely for the usual reasons….

We stayed at a boringly generic and “DRY” hotel whose sole redeeming quality was close proximity to the entrance to Petra. Off we set at 8 a.m. thoroughly bundled up as the temperature was hovering around 3 or 4 c. and rain in the forecast. The initial 2 k. walk in towards the “Treasury/Tomb” was good – fantastical rock formations, amazing carved rock structures and ancient engineering to channel and conserve water.

Much like the Egyptian Pyramids, the Nabatean Tombs are from differing time periods.

I always seem to be wishing for a Geologist…..

And then there is that first tantalizing glimpse of the “Treasury”.

Followed by all its remarkable glory. “A rose-red city half as old as time…” by John William Burgon. 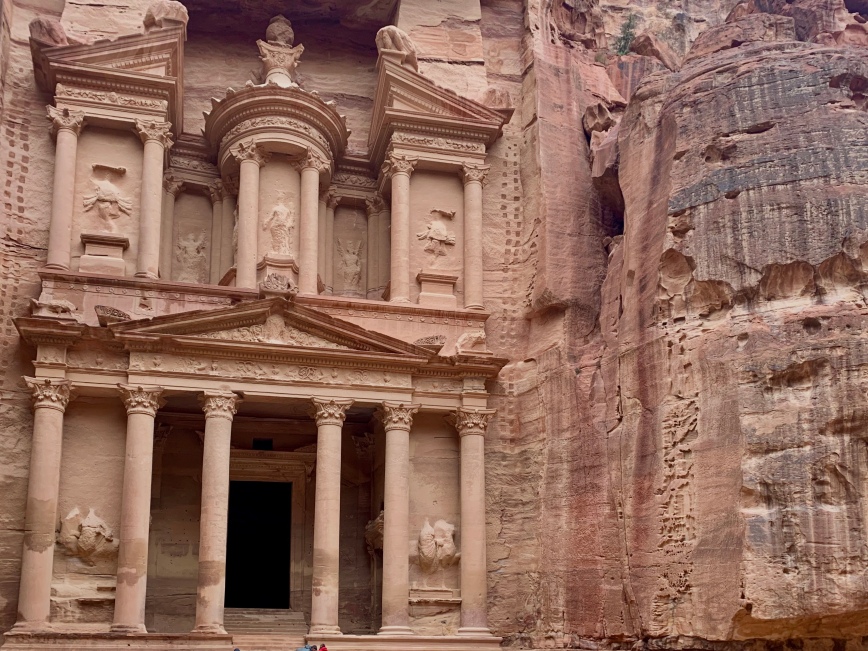 I find it mind boggling that this entire edifice was carved out of the rock not built.

Then things got really (!?) interesting. As we walked further along, the rain started – suspiciously solid, sideways driving torrential rain! My waterproof (HA!) down jacket gave up the ghost early on and I was wishing desperately for rain pants. Felicity and I struggled along past the rather beautiful amphitheater, warmed up a bit with hot, achingly sweet Turkish coffee and decided to tackle the “Royal Tombs”. They are a collection of caves carved into the side of one of the cliffs, roughly opposite the amphitheatre. On a good day you’d have to be a bit of a mountain goat – heaven alone knows what we were thinking but the rain let up so we thought “OK – doable”.

I managed to shelter for a few minutes in a small cave with a group of Bedouin women who kindly shared thier bread and fire. Not much mutual language of course other than wide smiles and hand gestures but the laws of hospitality are universal. Unfortunately Felicit slipped on the wet rock while trying to get into the cave and ended up with an eight centimetre scrape on her shin.

We managed to climb all the way to the top and most impressive tomb when the skies really opened up. 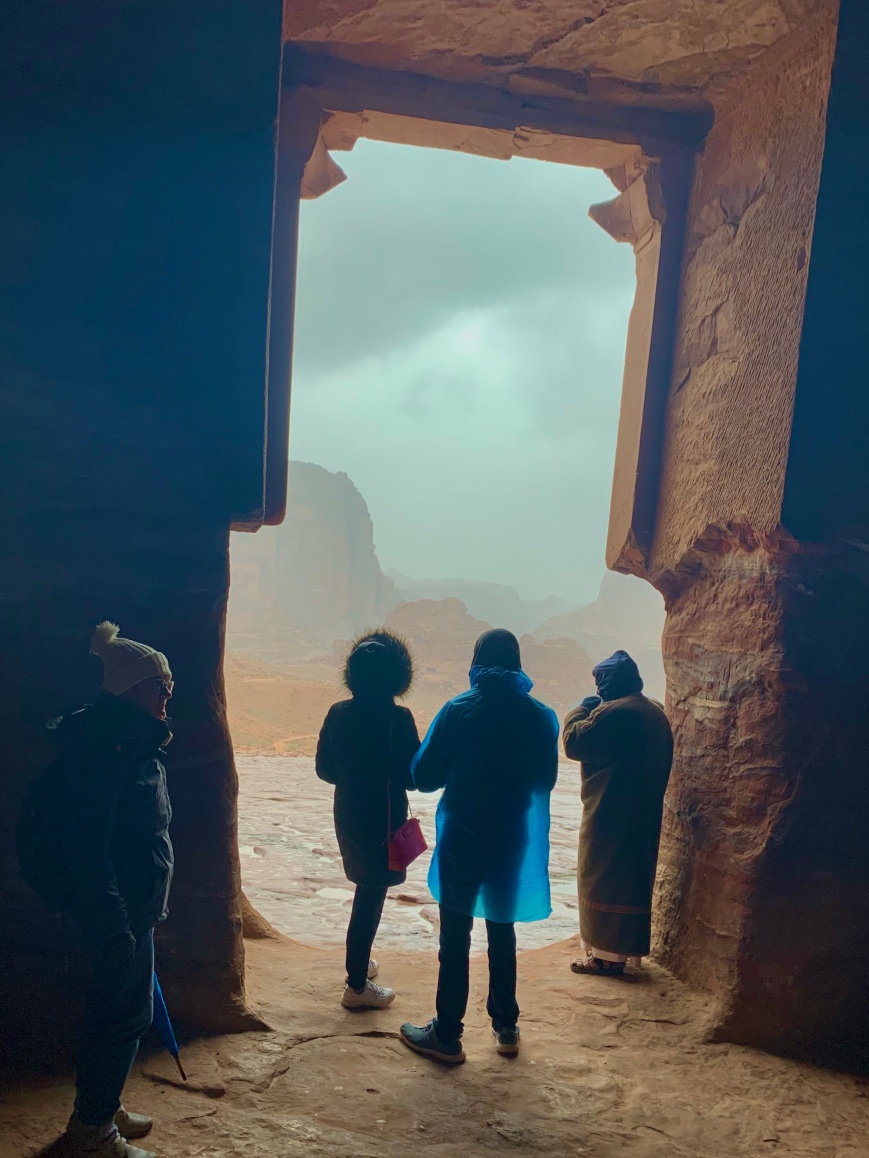 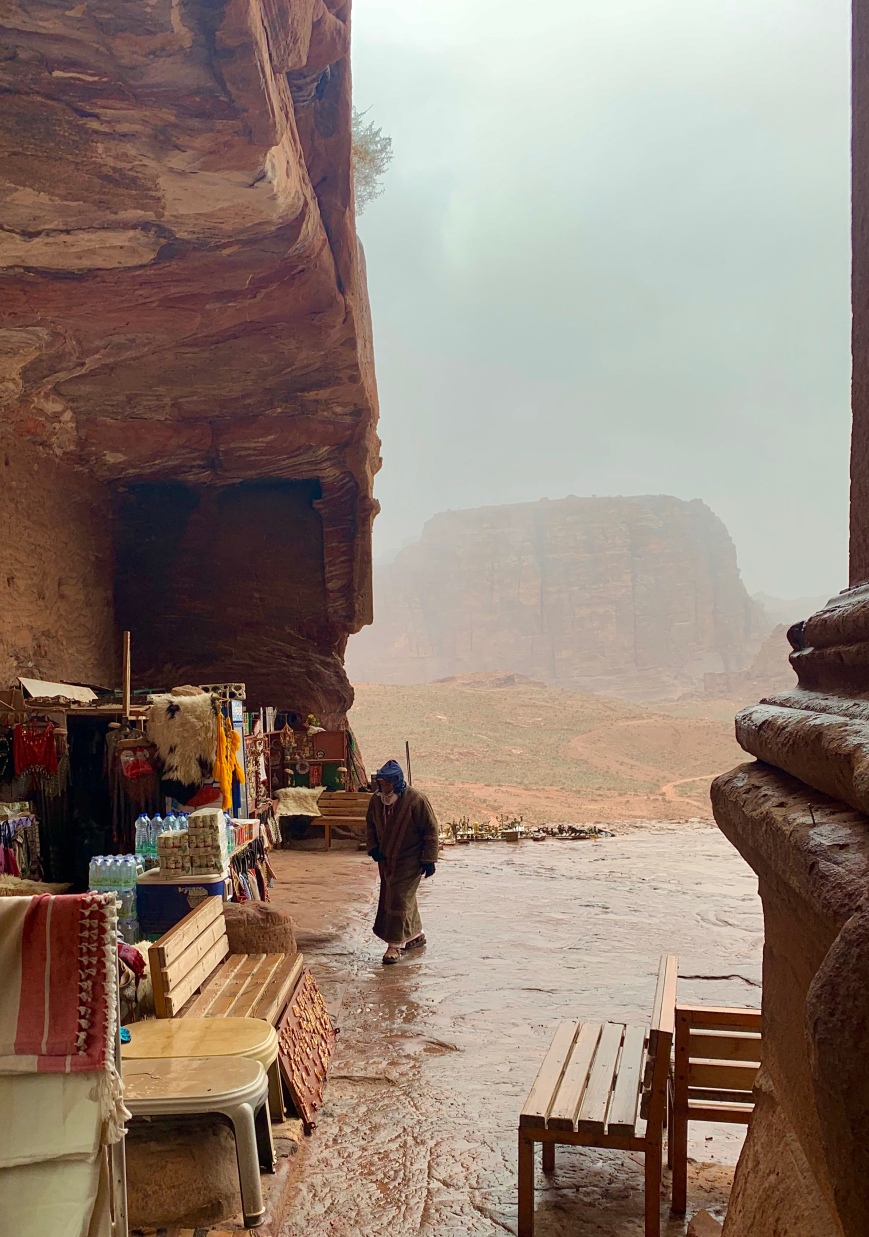 This is the ceiling of the top most tomb – extraordinary sedimentary rock!

By the time we could climb down, the “steps” were greasy and treacherous – and its a LONG way down as you can see from the pictures above.

By this point we were so cold and wet that we decided “discretion being the better part of valour” to head back to the hotel. There were more places yet to explore certainly but even us hardy Canadians know when to quit. Felicity and I slogged back to the Treasury, through running water often shin deep only to be told we were not being allowed further into the gorge back to the entrance. “We are worried about flash floods and they can be as much as 10 m.”, was what one of the police officers told us. Indeed they had opened the fence to the Treasury and were herding people into the two large rooms behind the facade. Pretty neat to actually get inside the building but I wasn’t comfortable being in an enclosed space with only one exit if the 10 m. of water were to actually happen! 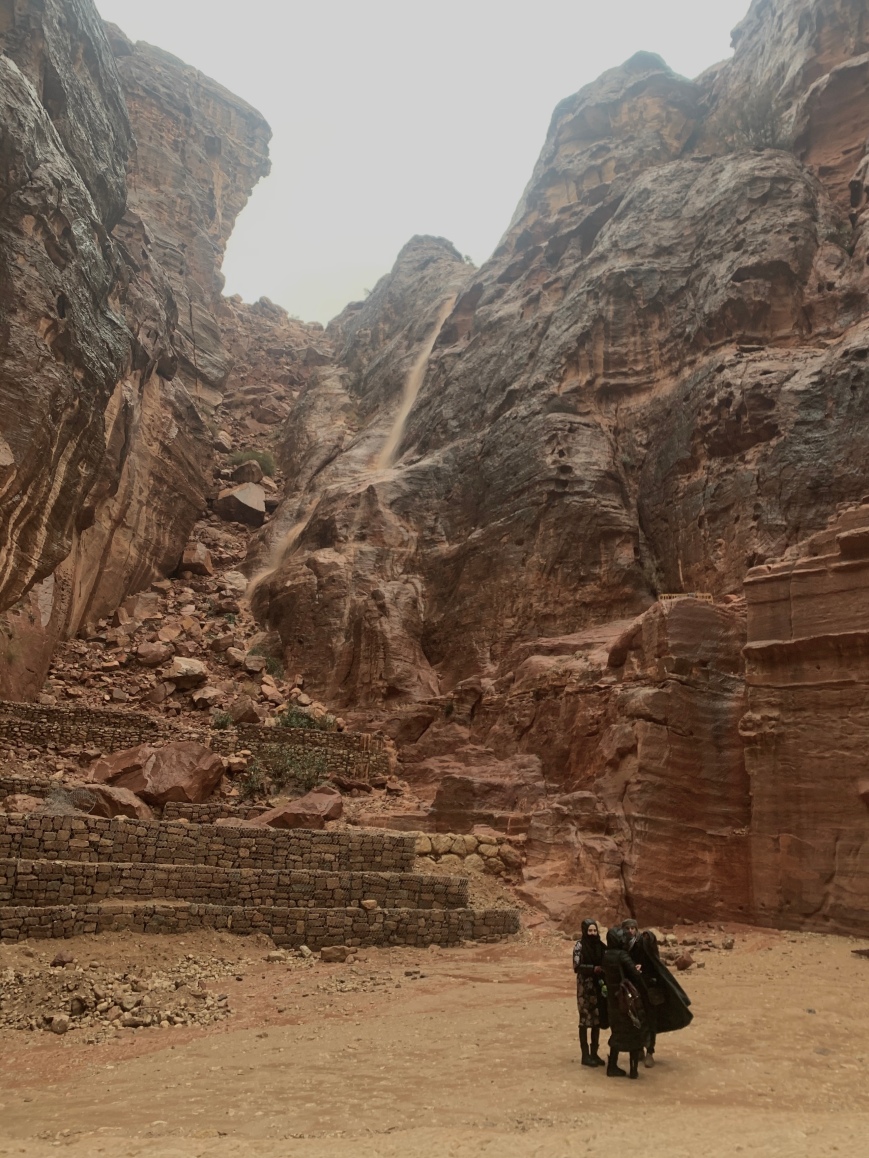 Eventually a few pick-up trucks started taking people away through another route. I figured it would be hours before they got to us as they were mostly taking Russian, Japanese and Chinese groups. Felicity and I waited tucked under an overhang with two disgruntled camels until the danger appeared to pass and we were allowed to tackle the gorge again. More freezing fast streams, slippery rocks, idiotic tourists and bone chilling cold – BUT we made it!

I have never regretted more staying in a “DRY” hotel than that day. Fortunately for my continued good humour the Movenpick next door had both wine and good food – bliss after a scaldingly hot shower, fresh dry clothes and boots!